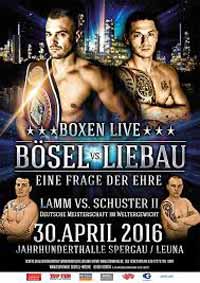 Review by AllTheBestFights.com: 2016-04-30, some good exchanges in the second part of the fight but it is not enough to get three stars: Dominic Boesel vs Denis Liebau gets two.

Both undefeated, Dominic Boesel entered this fight with a perfect record of 21-0-0 (7 knockouts) and he is ranked as the No.21 light heavyweight in the world while his opponent, Denis Liebau, has a boxing record of 19-0-0 (18 KOs=95%) and he entered as the No.91 in the same weight class. Boesel has already fought once in 2016 winning over Balazs Kelemen (=Boesel vs Kelemen) while Liebau’s last bout was held in 2015, against Zeljko Bojic. Boesel vs Liebau is valid for the WBO Inter-Continental and WBA Continental light heavyweight titles. Watch the video and rate this fight!