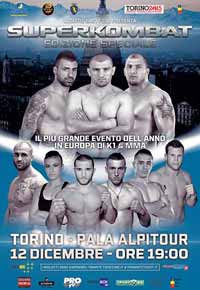 Review by AllTheBestFights.com: 2015-12-12, some tough exchanges and a spectacular finish: Bogdan Stoica vs Damian Garcia gets three stars.

Bogdan Stoica entered this fight with a professional kickboxing record of 44-8-0 (32 knockouts) and he is ranked as the No.11 cruiserweight in the world while his opponent, Damian Garcia, has an official record of 34-10-1 (25 knockouts). Stoica has already fought six times in 2015 losing just his last bout, against Ibrahim El Bouni; before this fight he had won over Patrick Veenstra (=Stoica vs Veenstra). Stoica vs Garcia is on the undercard of Catalin Morosanu vs Maurice Jackson (but we don’t post it because it was a shameful one-star-fight) – SuperKombat In The Cage. Watch the video and rate this fight!