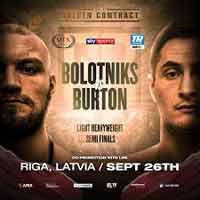 Review by AllTheBestFights.com: 2020-09-26, fight not particularly good between Ricards Bolotniks and Hosea Burton: it gets two stars.
Ricards Bolotniks entered this fight with a professional record of 16-5-1 (7 knockouts) and he is ranked as the No.21 light heavyweight in the world. He was defeated by Thabiso Mchunu in 2018, but then he has won five consecutive bouts defeating Sergei Ekimov and Steven Ward in his last two.
His opponent, Hosea Burton, has a boxing record of 25-1-0 (11 knockouts) and he entered as the No.43 in the same weight class. He suffered his only loss when he faced Frank Buglioni in 2016, since then he has won seven fights defeating Bob Ajisafe in his last one. Burton vs Bolotniks is the main event of the evening. Watch the video and rate this fight!