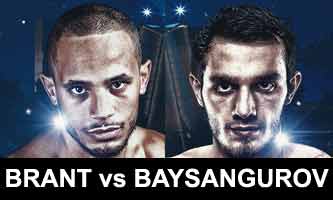 Review by AllTheBestFights.com: 2019-02-15, good performance by both boxers: Rob Brant vs Khasan Baysangurov gets three stars.

The Wba Mw champion Rob Brant entered this fight with a professional boxing record of 24-1-0 (16 knockouts) and he is ranked as the No.12 middleweight in the world. He suffered his only loss when he faced Juergen Braehmer in 2017 (Juergen Braehmer vs Rob Brant), after this bout he has beat Colby Courter and the 2012 Olympic Mw gold medalist Ryota Murata (Ryota Murata vs Rob Brant).
His opponent, the undefeated Khasan Baysangurov, has a perfect record of 17-0-0 (7 knockouts) and he entered as the No.24 in the same weight class. He is just 21 years old (seven years younger than Brant) and in his last three fights he has won over Lasha Gurguliani, Guido Nicolas Pitto and Paul Valenzuela Jr. Brant vs Baysangurov is valid for the WBA World middleweight title (Brant’s first defense). Watch the video and rate this fight!