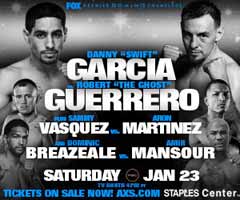 Review by AllTheBestFights.com: 2016-01-23, good fight between Dominic Breazeale and Amir Mansour: it gets three stars.

Amir Mansour entered this fight with a pro boxing record of 22-1-1 (16 knockouts) and he is ranked as the No.25 heavyweight in the world. He suffered his only loss in 2014 when he faced Steve Cunningham (4-stars-fight, Mansour vs Cunningham), after this bout he has collected two victories and one draw, against Gerald Washington (=Mansour vs Washington).
His opponent, the unefeated Dominic Breazeale, has a perfect boxing record of 16-0-0 (14 KOs=87%) and he entered as the No.37 in the same weight class. He fought three times last year beating Fred Kassi in his last one (=Breazeale vs Kassi). Mansour vs Breazeale is on the undercard of Danny Garcia vs Robert Guerrero. Watch the video and rate this fight!