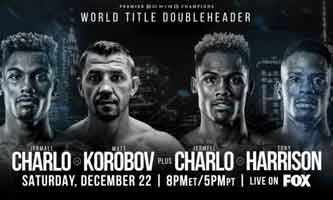 Review by AllTheBestFights.com: 2018-12-22, some good exchanges between Dominic Breazeale and Carlos Negron but it is not enough to get three stars: it gets two.

Both former Olympian, Dominic Breazeale entered this fight with a boxing record of 19-1-0 (17 KOs=89%) while his opponent, Carlos Negron, has an official record of 20-1-0 (16 KOs=80%). Both boxers are not ranked as they haven’t fought for more than one year: Breazeale had lost to current #1 Hw Anthony Joshua in 2016 (Anthony Joshua vs Dominic Breazeale) but then he beat Izuagbe Ugonoh (Dominic Breazeale vs Izuagbe Ugonoh) and Eric Molina in 2017 while Negron was defeated by Epifanio Mendoza in 2011 but since then he has collected seven consecutive victories. Breazeale vs Negron is on the undercard of Jermall Charlo vs Matt Korobov. Watch the video and rate this fight!