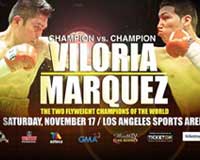 Review: 2012-11-17, exciting fight with three knockdowns and a spectacular fifth round (could be a candidate for Round of the Year 2012): the fight between Brian Viloria and Hernan Marquez is close to get four stars. The Filipino-American Brian Viloria (31-3-0) entered as the No.1 flyweight in the world while Hernan ‘Tyson’ Marquez (34-2-0) entered as the No.3. Viloria vs Marquez is valid for the WBA and WBO flyweight titles. Watch the video!