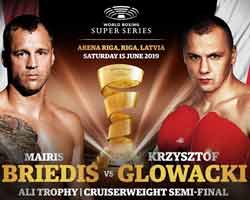 Review by AllTheBestFights.com: 2019-06-15, entertaining fight between Mairis Briedis and Krzysztof Glowacki: it gets three stars.

The former Wbc Cw champion Mairis Briedis entered this fight with a professional record of 25-1-0 (18 knockouts) and he is ranked as the No.2 cruiserweight in the world. He suffered his only loss when he faced current #1 Oleksandr Usyk in January (via majority decision, Oleksandr Usyk vs Mairis Briedis), after this bout he has defeated Brandon Deslaurier (Mairis Briedis vs Brandon Deslaurier) and Noel Gevor (Mairis Briedis vs Noel Gevor).
His opponent, the former Wbo Cw champion Krzysztof Glowacki, has a boxing record of 31-1-0 (19 knockouts) and he entered as the No.4 in the same weight class. He also lost to Usyk (in 2016 Glowacki vs Usyk), but since then he has won five bouts beating Santander Silgado (Krzysztof Glowacki vs Santander Silgado) and Maksim Vlasov in his last two (Krzysztof Glowacki vs Maksim Vlasov). Briedis vs Glowacki is the semi-final of the World Boxing Super Series cruiserweight tournament (WBSS – Muhammad Ali Trophy) and it is valid for the WBO and vacant WBC World cruiserweight title. Watch the video and rate this fight!