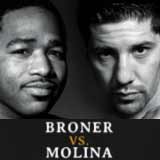 Adrien Broner entered this fight with a professional boxing record of 29-1-0 (22 KOs=76%) and he is ranked as the No.6 super lightweight in the world (currently the #1 in this division is Danny Garcia), he has won world titles in three different weight classes but he lost his WBA Ww belt in 2013 when he suffered his first and only defeat against Marcos Rene Maidana (=Broner vs Maidana). After this bout he came back to win beating Carlos Molina (=Broner vs Molina) and Emmanuel Taylor (=Broner vs Taylor).
His opponent, John Molina Jr, has a record of 27-5-0 (22 KOs=81%) and he entered as the No.31 in the same weight class but he lost his last two bouts: against Lucas Martin Matthysse (the Users’ boxing Fight of the Year 2014, Matthysse vs Molina) and against Humberto Soto (=Soto vs Molina). ‘AB’ Broner vs Molina Jr is on the undercard of Keith Thurman vs Robert Guerrero. Watch the video and rate this fight!