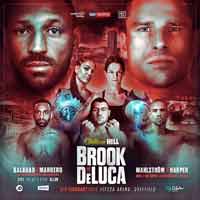 Review by AllTheBestFights.com: 2020-02-08, pretty good finish between Kell Brook and Mark DeLuca but it is not enough to get three stars: it gets two.

The former Ibf Ww champion Kell Brook entered this fight with a professional record of 38-2-0 (26 knockouts) and he is ranked as the No.7 super welterweight in the world (currently the #1 in this division is Jermell Charlo). He lost two consecutive fights between 2016 and 2017, against Gennady Golovkin (4-stars fight, Golovkin vs Brook) and Errol Spence Jr (Kell Brook vs Errol Spence Jr) but then he has beat Sergey Rabchenko (Kell Brook vs Sergey Rabchenko) and Michael Zerafa (Kell Brook vs Michael Zerafa).
His opponent, Mark DeLuca, has a boxing record of 24-1-0 (13 knockouts) and he entered as the No.61 in the same weight class. He suffered his only loss when he faced Walter Wright in 2018 but then he took revenge on him and he also beat Jimmy Williams and Brandon Brewer. Brook vs DeLuca is valid for the vacant WBO Inter-Continental super welterweight title. Watch the video and rate this fight!