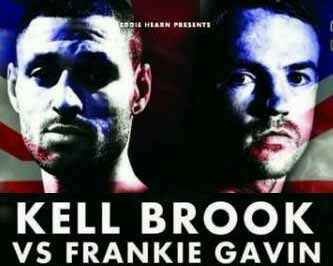 Review by AllTheBestFights.com: 2015-05-30, disappointing fight between Kell Brook and Frankie Gavin: it gets two stars.

The undefeated Kell Brook entered this fight with a perfect boxing record of 34-0-0 (23 knockouts) and he is ranked as the No.4 welterweight in the world (currently the #1 in this division is Floyd Mayweather Jr). He won the Ibf Ww title last year beating Shawn Porter (=Porter vs Brook) and he successfully defended it once against Ionut Dan Ion (=Brook vs Dan Ion).
His opponent, the 2007 world amateur boxing champion Frankie Gavin, has an official record of 22-1-0 (13 knockouts) and he entered as the No.13 in the same weight class. He suffered his only loss in 2014 when he faced Leonard Bundu (via split decision, Bundu vs Gavin), after this bout he has won three fights beating Bogdan Mitic in his last one. Brook vs Gavin is valid for the IBF World welterweight title (Brook’s second defense). Watch the video and rate this fight!