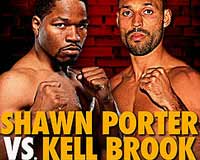 Review: 2014-08-16, close fight but it was not very exciting: Shawn Porter vs Kell Brook gets two stars. Both undefeated, the American Shawn Porter entered this fight with a professional boxing record of 24-0-1 (15 knockouts) and he is ranked as the No.6 welterweight in the world (currently the #1 in this division is Floyd Mayweather Jr), the only man who stopped him in a draw was Julio Diaz in 2012 but he managed to beat him one year later (=Porter vs Diaz 2); after this bout he won over Devon Alexander (=Alexander vs Porter) and Paul Malignaggi (=Porter vs Malignaggi).
His opponent, Kell Brook, has a perfect record of 32-0-0 (22 knockouts) and he entered as the No.7 in the same weight class, he has already fought in 2014 beating Alvaro Robles (=Brook vs Robles). Porter vs Brook is valid for the IBF welterweight title (Porter’s second defense), first world title-shot for Brook. Watch the video and rate this fight!