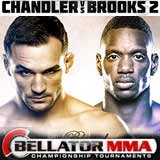 Review: 2014-11-15, some good single shots between Will Brooks and Michael Chandler but it is not enough to get three stars: it gets two. Will Brooks entered this fight with a pro mma record of 14-1-0 (57% finishing rate) and he is ranked as the No.10 lightweight in the world (currently the #1 in this division is Anthony Pettis), he suffered his only defeat in 2013 when he faced Saad Awad for the first time (=Brooks vs Awad I), since then he has fought and won five times taking revenge on Awad in their rematch (=Brooks vs Awad 2) and winning the interim Bellator Lw title against Chandler in their first fight (but it was a controversial split decision, Chandler vs Brooks I).
His opponent, Michael Chandler, has a record of 12-2-0 (83% finishing rate) and he entered as the No.11 in the same weight class but he comes off two consecutive defeats, both controversial split decision: against Eddie Alvarez (=Chandler vs Alvarez 2) and Brooks as we said earlier. Brooks vs Chandler 2 is valid for the vacant Bellator lightweight title; undercard of Tito Ortiz vs Stephan Bonnar – Bellator 131. Watch the video and rate this fight!

Result: Click here to show the fight’s result
Will Brooks def. Michael Chandler (TKO at 3:48, round 4)

Their previous fight: Michael Chandler vs Will Brooks

Brooks’ next fight: Will Brooks vs Dave Jansen

Video: (Free embeddable video hosted on Kiwi.kz and not uploaded by AllTheBestFights, to report it please visit this link where the video is hosted)