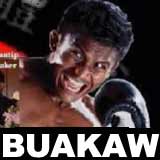 Review: 2014-06-06, nice exchanges and spectacular finish: Buakaw Banchamek vs Adailton Freitas is very close to get four stars! Buakaw Banchamek, formerly known as Buakaw Por Pramuk entered this fight with a professional kickboxing record of 215-21-12 (55 knockouts) and he is ranked as the No.1 super welterweight in the world, he suffered his last defeat in 2009 when he faced Andy Souwer in the semifinal of the K-1 World MAX, since then he has collected 28 consecutive wins!! Buakaw has already fought twice in 2014 beating Sung-Hyun Lee in February (semifinal of the K-1 Max, Buakaw vs Lee) and the young prospect Victor Nagbe in April (=Buakaw vs Nagbe).
His opponent, Adailton Parreira de Freitas (also known as Adaylton Freitas) should have a record of 54-17-2 and he comes off two consecutive losses in 2014: against Saenchai in January (=Saenchai vs Freitas) and Seyedisa Alamdarnezam in March. Buakaw vs Freitas, 70 kg fight of “Muay Thai Macau”. Watch the video and rate this fight!