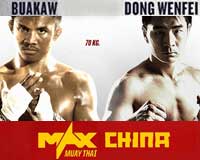 Review: 2013-08-10, tough and close fight between Buakaw Banchamek and Dong Wenfei: it gets three stars. Buakaw Banchamek, formerly known as Buakaw Por Pramuk, ranked as the No.2 super welterweight in the world, entered the fight with a record of 208-21-12 while Dong Wenfei had a record of 20-8-0. Buakaw vs Wenfei is the main event of “MAX Muay Thai 3: China”. Watch the video!