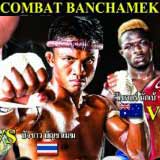 Review: 2014-04-14, technical fight but not particularly exciting: Buakaw Banchamek vs Victor Nagbe gets two stars. Buakaw Banchamek, formerly known as Buakaw Por Pramuk, entered this fight with a professional kickboxing record of 215-21-12 (56 knockouts) and he is ranked as the No.1 super welterweight in the world, he suffered his last defeat in 2009 when he faced Andy Souwer in the semifinal of the K-1 World MAX, since then he has collected 27 consecutive wins!!!
His opponent, Victor Nagbe, has an official record of 39-15-1 and he entered as the No.6 welterweight, he is just 19 years old (twelve years younger than Buakaw) and two weeks ago he managed to defeat Kem Sitsongpeenong by ko (=Kem vs Nagbe). Buakaw vs Nagbe is the main event of Combat Banchamek; they also faced each other a second time on May 21, 2018 (Buakaw Banchamek vs Victor Nagbe 2). Watch the video and rate this fight!