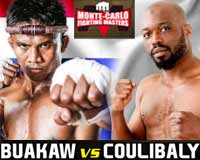 Review: 2014-06-14, good fight between Buakaw Banchamek and Djime Coulibaly: it gets three stars. Buakaw Banchamek, formerly known as Buakaw Por Pramuk entered this fight with a professional kickboxing record of 216-21-12 (56 knockouts) and he is ranked as the No.1 super welterweight in the world, he suffered his last defeat in 2009 when he faced Andy Souwer in the semifinal of the K-1 World Max, since then he has collected 29 consecutive wins!! Buakaw has already fought three times in 2014 beating Sung-Hyun Lee in February (semifinal of the K-1 Max, Buakaw vs Lee), the young prospect Victor Nagbe in April (=Buakaw vs Nagbe) and Adaylton Freitas just one week ago with a spectacular high kick (=Buakaw vs Freitas).
His opponent, Djime Coulibaly, has an official record of 49-10-4 (18 knockouts) and he entered as the No.6 middleweight, he has already fought twice in 2014 beating Ben Hodge in February (bout valid for the WMC 72,5 kg world title) but then he was defeated by Kongjak Sor Tuantong in April. In the first fight between Buakaw and Coulibaly the Thai beat the French on points (May 14, 2011 Buakaw vs Coulibaly I). Buakaw vs Coulibaly 2 is valid for the WMC world super welterweight title, main event of Monte Carlo Fighting Masters 2014. Watch the video and rate this fight!