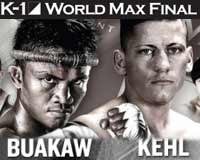 Review: 2014-10-11, pretty good fight but with a shameful finish… it’s better we rate just the bout: Buakaw Banchamek vs Enriko Kehl 2 gets three stars. Buakaw Banchamek, formerly known as Buakaw Por Pramuk, entered this fight with a professional kickboxing record of 219-21-12 (57 knockouts) and he is ranked as the No.1 super welterweight in the world, he suffered his last defeat in 2009 when he faced Andy Souwer in the semifinal of the K-1 World Max, since then he has collected 32 consecutive wins! He has already fought six times in 2014 beating in his last bout Zhang Chunyu (=Buakaw vs Chunyu).
His opponent, Enriko Kehl, has an official record of 62-8-2 or 35-7-1 (26 knockouts) and he entered as the No.7 middleweight, he suffered two defeats in 2013, against Buakaw in their first bout (=Buakaw vs Kehl) and Dzhabar Askerov, but he came back to win in 2014 beating Maximo Suarez (=Kehl vs Suarez), Shane Campbell (=Kehl vs Campbell) and Chad Sudgen. Buakaw vs Kehl 2 is the final of K-1 MAX 2014 world championship tournament and it is valid for the K-1 World MAX title. Watch the video and rate this fight!

Result: Click here to show the fight’s result
Enriko Kehl def. Buakaw Banchamek (after three rounds the fight ended in a DRAW and Buakaw walked out probably because he didn’t accept the decision, so he didn’t fight the fourth round and Kehl is declared the winner!)