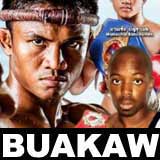 Review: 2014-08-15, pretty good fight with a spectacular finish: the second fight between Buakaw Banchamek and Abdoul Toure gets three stars. Buakaw Banchamek entered this fight with a professional kickboxing record of 217-21-12 (56 knockouts) and he is ranked as the No.1 super welterweight in the world, he suffered his last defeat in 2009 when he faced Andy Souwer in the semifinal of the K-1 World Max, since then he has collected 30 consecutive wins! He has already fought four times in 2014 beating in his last bout Djime Coulibaly (=Buakaw vs Coulibaly 2).
His opponent, Abdoul Toure, has a record of 16-5-0 (7 knockouts), he has already fought once in 2014 but he was beat by Petchmongkong Petchfocus. In their first fight Buakaw defeated Toure in two rounds (August 17, 2012); this second bout is valid for the WBC Muaythai Diamond belt (70 kg). Watch the video and rate this fight!