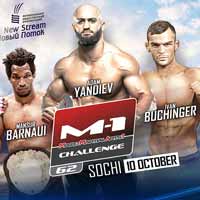 Review by AllTheBestFights.com: 2015-10-10, pretty boring fight between Ivan Buchinger and Mansour Barnaoui: it gets two stars.

Ivan Buchinger entered this fight with a pro mma record of 29-4-0 (83% finishing rate) and he is ranked as the No.22 featherweight in the world. He suffered his last loss in 2012 when he faced Conor Mcgregor (=Mcgregor vs Buchinger), since then he has won eight consecutive fights.
His opponent, Mansour Barnaoui, has a record of 12-2-0 (92% finishing rate) and he entered as the No.63 lightweight. He lost to Islam Makhachev in 2013 but then he has won four bouts beating Maxim Divnich in his last one (=Divnich vs Barnaoui). Buchinger vs Barnaoui, main event of M-1 Challenge 62, is valid for the M-1 Challenge featherweight title. Watch the video and rate this fight!