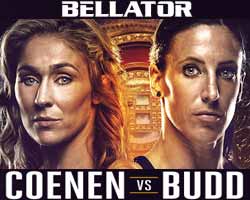 Review by AllTheBestFights.com: 2017-03-03, pretty good finish but the rest of the fight was quite boring: Marloes Coenen vs Julia Budd gets two stars.

The former Strikeforce Bw champion Marloes Coenen entered this fight with a pro mma record of 23-7-0 (87% finishing rate) and she is ranked as the No.7 women’s featherweight in the world but she comes off the loss against Alexis Dufresne (=Coenen vs Dufresne).
Her opponent, Julia Budd, has a record of 9-2-0 (44% finishing rate) and she entered as the No.5 in the same weight class. She suffered her last loss when she faced Ronda Rousey in 2011, since then she has won seven consecutive bouts beating Arlene Blencowe in 2016. Marloes Coenen vs Julia Budd, main event of Bellator 174, is valid for the inaugural Bellator women’s featherweight title. Watch the video and rate this fight!