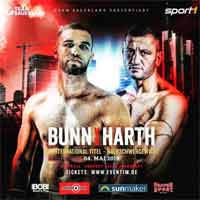 Review by AllTheBestFights.com: 2019-05-04, pretty good fight between Leon Bunn and Leon Harth: it gets three stars.

The undefeated Leon Bunn entered this fight with a perfect record of 13-0-0 (7 knockouts) and he is ranked as the No.30 light heavyweight in the world. In his last three fights he has won over Emmanuel Feuzeu, Yannick N’Galeu and Viktor Polyakov.
His opponent, Leon Harth, has a boxing record of 18-3-0 (12 knockouts) and he entered as the No.35 in the same weight class. He lost to Artur Mann in 2017, but then he has beat Fadil Pasalic, Karel Horejsek and Ibragim Tsurov. Bunn vs Harth is valid for the vacant IBF International light heavyweight title. Watch the video and rate this fight!