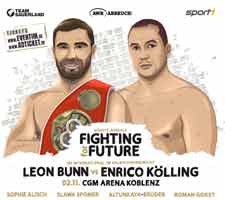 Review by AllTheBestFights.com: 2019-11-02, good performance by both boxers: Leon Bunn vs Enrico Koelling gets three stars.

The undefeated Leon Bunn entered this fight with a perfect record of 14-0-0 (8 knockouts) and he is ranked as the No.32 light heavyweight in the world. In his last three fights he has won over Yannick N’Galeu, Viktor Polyakov and Leon Harth (Leon Bunn vs Leon Harth).
His opponent, the former Olympian Enrico Koelling, has an official boxing record of 26-3-0 (8 knockouts) but he is not ranked as he hasn’t fought since October 27, 2018 when he was defeated by Dominic Boesel; before this fight he had won over Andrejs Pokumeiko. Bunn vs Koelling is valid for the IBF International light heavyweight title. Watch the video and rate this fight!