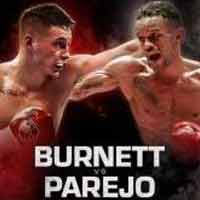 Review by AllTheBestFights.com: 2018-03-31, some good single shots between Ryan Burnett and Yonfrez Parejo but it is not enough to get three stars: it gets two.

The undefeated Ibf and Wba Bw champion Ryan Burnett entered this fight with a perfect record of 18-0-0 (9 knockouts) and he is ranked as the No.2 bantamweight in the world (currently the #1 in this division is Jamie McDonnell). He fought three times last year winning over Joseafat Reyes, Lee Haskins (Haskins vs Burnett) and Zhanat Zhakiyanov (Ryan Burnett vs Zhanat Zhakiyanov).
His opponent, Yonfrez Parejo, has an official record of 21-2-1 (10 knockouts) and he entered as the No.35 super bantamweight. He lost to Zhakiyanov in 2015 (via split decision, Yonfrez Parejo vs Zhanat Zhakiyanov) but then he has won four bouts beating Lorenzo Parra and Elkin Rosario in 2017. Burnett vs Parejo is valid for the WBA Super World bantamweight title; undercard of Anthony Joshua vs Joseph Parker. Watch the video and rate this fight!