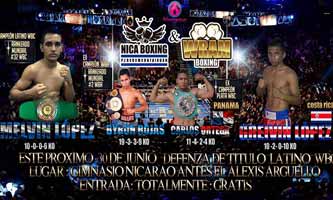 Review by AllTheBestFights.com: 2017-06-30, high pace with some tough exchanges from the first bell: Byron Rojas vs Carlos Ortega is close to get four stars!

The former Wba champion Byron Rojas entered this fight with a professional boxing record of 19-3-3 (9 knockouts) and he is ranked as the No.6 minimumweight in the world (currently the #1 in this division is Wanheng Menayothin). He lost to Knockout CP Freshmart last year (=CP Freshmart vs Rojas) but then he has won over Omar Ortiz and Juan Lopez Martinez.
His opponent, Carlos Ortega, has an official record of 11-4-2 (4 knockouts) and he entered as the No.48 in the same weight class. He suffered his last loss when he faced Ricardo Perez in 2014 but since then he has fought just once beating Argenis Cheremo. Byron Rojas vs Carlos Ortega is on the undercard of Melvin Lopez vs Greivin Lopez. Watch the video and rate this fight!