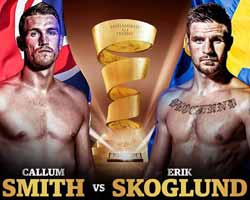 Review by AllTheBestFights.com: 2017-09-16, good fight between Callum Smith and Erik Skoglund: it gets three stars.

Both undefeated, the englishman Callum Smith entered this fight with a perfect record of 22-0-0 (17 KOs=77%) and he is ranked as the No.5 super middleweight in the world (currently the #1 in this division is Gilberto Ramirez) while his opponent, Erik Skoglund, has a boxing record of 26-0-0 (12 knockouts) and he entered as the No.11 in the same weight class. Smith fought four times in 2016 winning over Hadillah Mohoumadi (=Smith vs Mohoumadi), Cesar Hernan Reynoso (=Smith vs Reynoso) Norbert Nemesapati (=Smith vs Nemesapati) and Luke Blackledge (=Smith vs Blackledge) while Skoglund fought twice beating Ryno Liebenberg (=Skoglund vs Liebenberg) and Timy Shala. Callum Smith vs Erik Skoglund is the quarter final of the World Boxing Super Series super middleweight tournament. Watch the video and rate this fight!