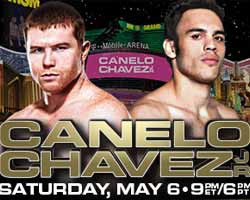 The world champion in two different weight classes Saul Canelo Alvarez entered this fight with a professional record of 48-1-1 (34 knockouts) and he is ranked as the No.1 super welterweight in the world. He suffered his only loss when he faced Floyd Mayweather Jr in 2013 (via majority decision, Mayweather vs Alvarez), since then Canelo has won six consecutive fights defeating Miguel Cotto (=Cotto vs Alvarez), Amir Khan (4-stars fight, Canelo vs Khan) and Liam Smith in his last three (=Canelo vs Smith).
His opponent, the former Wbc Mw champion Julio Cesar Chavez Jr, has a boxing record of 50-2-1 (32 knockouts) and he entered as the No.12 super middleweight. JC Jr suffered his last loss when he faced Andrzej Fonfara in 2015 (=Chavez Jr vs Fonfara); after this bout he has won over Marcos Reyes (=Chavez Jr vs Reyes) and Dominik Britsch (=Chavez Jr vs Britsch). Alvarez vs Chavez Jr is the main event of the evening. Watch the video and rate this fight!