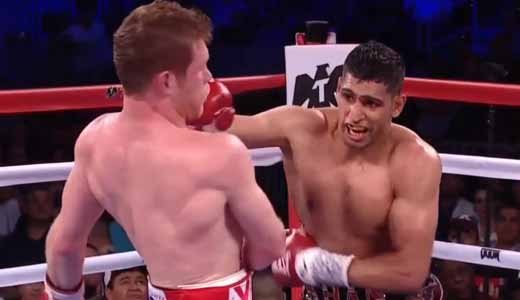 Review by AllTheBestFights.com: 2016-05-07, good fight with a spectacular finish: Saul Canelo Alvarez vs Amir Khan is one of the best boxing fights of the year 2016 and it gets four stars!

The Wbc Mw champion Saul Alvarez entered this fight with a boxing record of 46-1-1 (32 knockouts) and he is ranked as the No.1 middleweight in the world. He suffered his only loss when he faced Floyd Mayweather Jr in 2013 (=Mayweather vs Alvarez), after this bout the Mexican has won four consecutive fights defeating James Kirkland (boxing Fight of the Year 2015, Canelo vs Kirkland) and Miguel Cotto (=Cotto vs Alvarez).
His opponent, the former world champion in two different weight classes Amir Khan, has an official record of 31-3-0 (19 knockouts) and he entered as the No.4 welterweight. He lost two consecutive fights between 2011 and 2012, against Lamont Peterson (=Peterson vs Khan) and Danny Garcia (=Garcia vs Khan), but since then he has won five bouts beating Devon Alexander (=Khan vs Alexander) and Chris Algieri in his last two (=Khan vs Algieri). Canelo vs Khan is valid for the WBC World middleweight title. Watch the video and rate this fight!