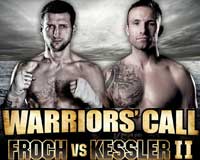 Review: 2013-05-25, nice and close fight with some spectacular exchanges in the last part of the bout: Carl Froch vs Mikkel Kessler II gets three stars. Carl Froch (30-2-0, 22 KOs) entered as the No.2 super middleweight in the world while Mikkel Kessler (46-2-0, 35 KOs) entered as the No.4. In their first fight Kessler defeated Froch by unanimous decision (October 24, 2010); this second fight is valid for the IBF and WBA Super World super middleweight titles. Watch the video!