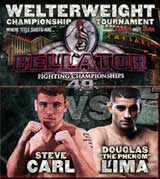 Review: 2011-09-10, pleasant fight between Steve Carl and Douglas Lima but it is not enough for our three stars. Lima defeated Steve Carl by unanimous decision, welterweight quarterfinal of the Bellator Fighting Championships 49. Watch the video!