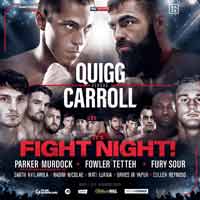 Review by AllTheBestFights.com: 2020-03-07, good fight between Scott Quigg and Jono Carroll: it gets three stars.

The former Wba super-Bw champion Scott Quigg entered this fight with a professional boxing record of 35-2-2 (26 knockouts) but he is not ranked as he hasn’t fought since October 20, 2018 when he defeated Mario Briones; before this bout he had lost to Oscar Valdez (Oscar Valdez vs Scott Quigg).
His opponent, Jono Carroll, has an official record of 17-1-1 (3 knockouts) and he entered as the No.49 super featherweight in the world. He fought twice last year losing to Tevin Farmer (Tevin Farmer vs Jono Carroll) and beating Eleazar Valenzuela. Quigg vs Carroll is the main event of the evening. Watch the video and rate this fight!

Report broken video
« 2020 BOXING fight – Zach Parker vs Rohan Murdock – full fight Video
2020 BOXING fight – Adam Kownacki vs Robert Helenius – full fight Video »
HELP US!!! Since the CORONAVIRUS pandemic started, AllTheBestFights.com has struggled to survive! If you have enjoyed this website for the past 10 years, today we ask you for a little help: