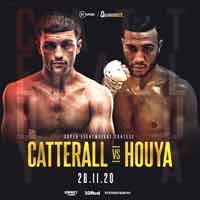 Review by AllTheBestFights.com: 2020-11-28, fight not so exciting between Jack Catterall and Abderrazak Houya: it gets two stars (take a look at our ranking of the best boxing fights of 2020).
The undefeated Jack Catterall entered this fight with a perfect record of 25-0-0 (13 knockouts) and he is ranked as the No.12 super lightweight in the world. In his last three fights he has won over Ohara Davies (Jack Catterall vs Ohara Davies), Oscar Amador (Jack Catterall vs Oscar Amador) and Timo Schwarzkopf (Jack Catterall vs Timo Schwarzkopf).
His opponent, the former Olympian Abderrazak Houya, has a boxing record of 14-2-0 (2 knockouts) and he entered as the No.139 in the same weight class but he comes off the loss against Jon Fernandez; before this bout he had beat Kelly Figueroa in July 2019 and Ala Edine Moussa in November of the same year. Houya vs Catterall is on the undercard of Daniel Dubois vs Joe Joyce. Watch the video and rate this fight!

« 2020 MMA fight – Anthony Smith vs Devin Clark – fight Video UFC on ESPN 18
Best fights of the week 48, year 2020 »
HELP US!!! Since the CORONAVIRUS pandemic started, AllTheBestFights.com has struggled to survive! If you have enjoyed this website for the past 10 years, today we ask you for a little help: