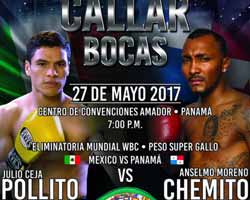 Review by AllTheBestFights.com: 2017-05-27, pretty good fight between Anselmo Moreno and Julio Ceja: it gets three stars.

The former Wba super-Bw champion Anselmo Moreno entered this fight with a professional boxing record of 36-5-1 (12 knockouts) and he is ranked as the No.5 bantamweight in the world (currently the #1 in this division is Shinsuke Yamanaka) but he won just one out of his last four fights, against Suriyan Sor Rungvisai (=Moreno vs Rungvisai); after this bout ‘Chemito’ Moreno was defeated by current #1 Shinsuke Yamanaka in their rematch (=Yamanaka vs Moreno II).
His opponent, the former Wbc super-Bw champion Julio Ceja, has an official record of 30-2-0 (27 KOs=90%) but he is not ranked as he hasn’t fought since February 27, 2016 when he was defeated by Hugo Ruiz in their rematch (=Ceja vs Ruiz II) while in their first fight ‘Pollito’ Ceja had beat Ruiz (=Ceja vs Ruiz I). Julio Ceja vs Anselmo Moreno is valid for the vacant WBC Silver super bantamweight title. Watch the video and rate this fight!