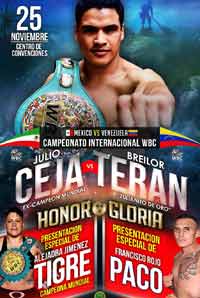 Review by AllTheBestFights.com: 2017-11-25, nice and tough exchanges between Julio Ceja and Breilor Teran: it gets three stars.

The former Wbc super-Bw champion Julio Ceja entered this fight with a professional record of 31-2-0 (28 KOs=90%) and he is ranked as the No.6 super bantamweight in the world (currently the #1 in this division is Guillermo Rigondeaux). Between 2015 and 2016 he faced twice Hugo Ruiz: in their first fight ‘Pollito’ Ceja had beat Ruiz (=Ceja vs Ruiz I) while in their rematch he was defeated (=Ceja vs Ruiz II); after this bout Ceja has beat Anselmo Moreno (=Moreno vs Ceja).
His opponent, Breilor Teran, has a boxing record of 20-14-1 (13 knockouts) and he entered as the No.34 in the same weight class. He lost to Omar Narvaez last year (=Narvaez vs Teran) but then he has won five bouts beating Jeffrey Quintero in his last one. Ceja vs Teran is valid for the WBC Silver super bantamweight title. Watch the video and rate this fight!