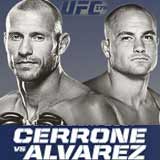 Review: 2014-09-27, good fight between Donald Cerrone and Eddie Alvarez: it gets three stars. Donald Cerrone entered this fight with a pro mma record of 24-6-0 (79% finishing rate) and he is ranked as the No.6 lightweight in the world (currently the #1 in this division is Anthony Pettis), he suffered his last defeat last year when he faced Rafael dos Anjos (=Cerrone vs dos Anjos), after that bout he has won four consecutive fights, three in 2014: against Adriano Martins (=Cerrone vs Martins), Edson Barboza (=Cerrone vs Barboza) and Jim Miller (=Cerrone vs Miller).
His opponent, the former Bellator Lw champion Eddie Alvarez, has a record of 25-3-0 (84% finishing rate) and he entered as the No.7 in the same weight class, he suffered his last loss in 2011 when he faced for the first time Michael Chandler (4-stars-fight Chandler vs Alvarez I), since then he has fought and won three consecutive bouts and in his last fight he took revenge on Chandler (but it was a controversial decision Chandler vs Alvarez II). ‘Cowboy’ Cerrone vs Alvarez is on the undercard of Demetrious Johnson vs Chris Cariaso – UFC 178. Watch the video and rate this fight!