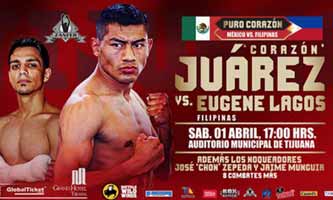 Review by AllTheBestFights.com: 2017-04-01, nice exchanges between Cesar Juarez and Eugene Lagos: it gets three stars.

Cesar Juarez entered this fight with a pro boxing record of 19-5-0 (14 knockouts) and he is ranked as the No.7 super bantamweight in the world (currently the #1 in this division is Guillermo Rigondeaux) while his opponent, Eugene Lagos, has a record of 11-3-2 (7 knockouts). Juarez suffered two consecutive losses between 2015 and 2016, against Nonito Donaire (4-stars fight Donaire vs Juarez) and Giovanni Delgado, but then he has won over Albert Pagara (=Pagara vs Juarez) and Richard Pumicpic (=Juarez vs Pumicpic) while Lagos has already fought twice in 2017 beating Robert Awitin and losing to Valery Tretyakov. Cesar Juarez vs Eugene Lagos is the main event of the evening. Watch the video and rate this fight!