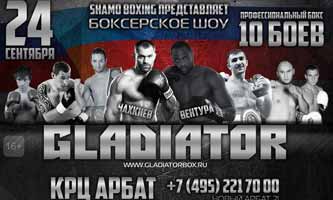 Review by AllTheBestFights.com: 2015-09-24, some good single shots between Rakhim Chakhkiev and Hamilton Ventura but it is not enough to get three stars: it gets two.

The 2008 Olympic heavyweight gold medalist Rakhim Chakhkiev entered this fight with a boxing record of 23-1-0 (18 KOs=78%) and he is ranked as the No.7 cruiserweight in the world (currently the #1 in this division is Grigory Drozd) while his opponent, Hamilton Ventura, has an official record of 14-1-1 (12 KOs=86%). Chakhkiev suffered his only loss in 2013, against Krzysztof Wlodarczyk (=Wlodarczyk vs Chakhkiev) but then he has won seven consecutive bouts, while Ventura was defeated by Yunier Dorticos in 2014 and then he won over Augusto Custodio de Melo. Chakhkiev vs Ventura is the main event of the evening. Watch the video and rate this fight!