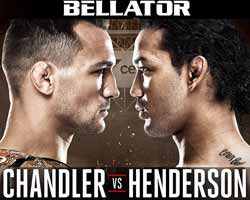 Review by AllTheBestFights.com: 2016-11-19, great performance by both fighters: Michael Chandler vs Benson Henderson is close to get four stars!

The Bellator Lw champion Michael Chandler entered this fight with a pro mma record of 15-3-0 (87% finishing rate) and he is ranked as the No.12 lightweight in the world. He lost three consecutive bouts between 2013 and 2014, the last two against Will Brooks (=Chandler vs Brooks I and Brooks vs Chandler II), but then he has won three fights beating Patricky Freire in 2016 (=Chandler vs Freire 2).
His opponent, the black belt in tae-kwon-do, Bjj and former Ufc Lw champion Benson Henderson, has a record of 24-6-0 (54% finishing rate) and he entered as the No.6 in the same weight class. He has fought twice in 2016 losing to Andrey Koreshkov (=Koreshkov vs Henderson) and winning over Patrício Freire (=Henderson vs Freire). Chandler vs Henderson, main event of Bellator 165, is valid for the Bellator lightweight title. Watch the video and rate this fight!

Video: (Free embeddable video hosted on Ok.ru Youtube and not uploaded by AllTheBestFights)