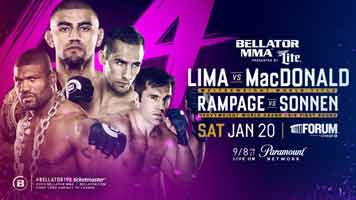 Review by AllTheBestFights.com: 2018-01-20, fight not particularly good between Michael Chandler and Goiti Yamauchi: it gets two stars.

The former Bellator Lw champion Michael Chandler entered this fight with a mma record of 16-4-0 (81% finishing rate) and he is ranked as the No.18 lightweight in the world. He fought twice in 2016 beating Patricky Freire (=Chandler vs Freire 2) and Benson Henderson (=Chandler vs Henderson) but then he lost the Bellator Lw title in 2017 with Brent Primus (=Chandler vs Primus).
His opponent, the black belt in Bjj Goiti Yamauchi, has an official record of 22-3-0 (86% finishing rate) and he entered as the No.41 in the same weight class. He lost to Bubba Jenkins in 2016 (=Yamauchi vs Jenkins) but then he has won over Ryan Couture, Valeriu Mircea and Adam Piccolotti. Chandler vs Yamauchi is on the undercard of Douglas Lima vs Rory MacDonald – Bellator 192. Watch the video and rate this fight!