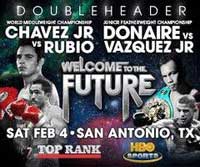 Review: 2012-02-04, pretty fight with an epic eleventh round: three stars for Julio Cesar Chavez Jr vs Marco Antonio Rubio (fight ended by unanimous decision). The undefeated Julio Cesar Chavez Jr (44-0-1) entered as the No.4 middleweight in the world while Marco Antonio Rubio (53-5-1) entered as the No.9. Chavez Jr vs Rubio is valid for the WBC middleweight title (Chavez’s second defense). Watch the video!