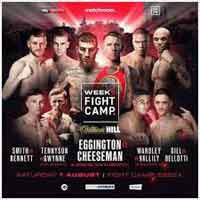 Review by AllTheBestFights.com: 2020-08-01, good fight between Sam Eggington and Ted Cheeseman: it gets three stars.
Sam Eggington entered this fight with a pro boxing record of 28-6-0 (17 knockouts) and he is ranked as the No.31 super welterweight in the world. He lost to Liam Smith last year in March (Liam Smith vs Sam Eggington) but then he has won over Jordan Grannum, Lewis van Poetsch, Orlando Fiordigiglio and Daniel Urbanski.
His opponent, Ted Cheeseman, has a record of 15-2-1 (9 knockouts) and he entered as the No.40 in the same weight class but his last victory was against Asinia Byfield in 2018; after this bout he lost twice, against Sergio Garcia (Sergio Garcia vs Ted Cheeseman) and Scott Fitzgerald (Scott Fitzgerald vs Ted Cheeseman), but between these two fights he also tied with Kieron Conway. Cheeseman vs Eggington is the main event of the evening. Watch the video and rate this fight!