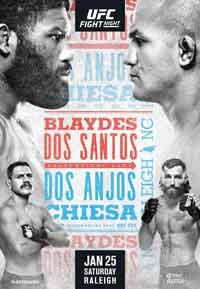 Review by AllTheBestFights.com: 2020-01-25, disappointing fight between Rafael dos Anjos and Michael Chiesa: it gets two stars.

The black belt in Brazilian jiu-jitsu and former Ufc Lw champion Rafael dos Anjos entered this fight with a pro mma record of 30-12-0 (53% finishing rate) and he is ranked as the No.7 welterweight in the world (currently the #1 in this division is Kamaru Usman) but he won just one out of his four fights, against Kevin Lee last year (Rafael dos Anjos vs Kevin Lee); after this bout he has lost to Leon Edwards (Rafael dos Anjos vs Leon Edwards).
His opponent, the Tuf winner Michael Chiesa, has a record of 16-5-0 (69% finishing rate) and he entered as the No.25 in the same weight class. He lost two consecutive bouts between 2017 and 2018, against Kevin Lee (Michael Chiesa vs Kevin Lee) and Anthony Pettis (Anthony Pettis vs Michael Chiesa), but then he has beat Carlos Condit (Carlos Condit vs Michael Chiesa) and Diego Sanchez (Michael Chiesa vs Diego Sanchez). Dos Anjos vs Chiesa is on the undercard of Curtis Blaydes vs Junior dos Santos – UFC Fight Night 166. Watch the video and rate this fight!