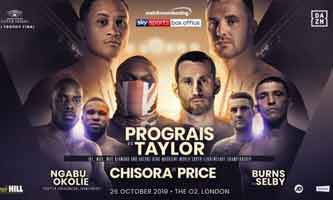 Review by AllTheBestFights.com: 2019-10-26, fight not particularly good between Dereck Chisora and David Price: it gets two stars.

Dereck Chisora entered this fight with a pro boxing record of 31-9-0 (22 knockouts) and he is ranked as the No.13 heavyweight in the world. He lost the rematch with Dillian Whyte last year (Dillian Whyte vs Dereck Chisora 2) but then he has beat Senad Gashi (Dereck Chisora vs Senad Gashi) and Artur Szpilka (Dereck Chisora vs Artur Szpilka).
His opponent, the former Olympian David Price (who replaces Joseph Parker), has a record of 25-6-0 (20 KOs=80%) and he entered as the No.21 in the same weight class. He lost two consecutive bouts in 2018, against Alexander Povetkin (Alexander Povetkin vs David Price) and Sergey Kuzmin (Sergey Kuzmin vs David Price) but then he has beat Tom Little, Kash Ali and David Allen (David Allen vs David Price). Chisora vs Price is valid for the vacant WBO Inter-Continental heavyweight title; undercard of Regis Prograis vs Josh Taylor. Watch the video and rate this fight!