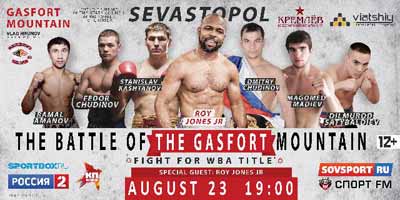 Review by AllTheBestFights.com: 2015-08-23, one sided fight between Dmitry Chudinov and Geard Ajetovic: it gets two stars.

Dmitry Chudinov entered this fight with a pro boxing record of 14-1-2 (9 knockouts) and he is ranked as the No.27 middleweight in the world but he comes off his first loss, suffered against Chris Eubank Jr (=Chudinov vs Eubank Jr).
His opponent, Geard Ajetovic (who replaces Adrian Luna Flores), has a record of 26-12-1 (12 knockouts) and he entered as the No.96 super middleweight but he comes off two consecutive defeats: against Dilmurod Satybaldiev and Niklas Rasanen. Chudinov vs Ajetovic is on the undercard of Stanislav Kashtanov vs Felix Valera. Watch the video and rate this fight!