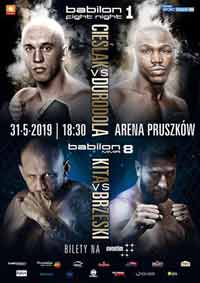 Review by AllTheBestFights.com: 2019-05-31, fight not so exciting between Michal Cieslak and Olanrewaju Durodola: it gets two stars.

The undefeated Michal Cieslak entered this fight with a perfect boxing record of 18-0-0 (12 knockouts) and he is ranked as the No.21 cruiserweight in the world. In his last three bouts he has won over Serhiy Radchenko, Dusan Krstin and Youri Kayembre Kalenga (Michal Cieslak vs Youri Kayembre Kalenga).
His opponent, the former Olympian Olanrewaju Durodola, has an official record of 29-6-0 (27 KOs=93%) and he entered as the No.28 in the same weight class. He lost two consecutive fights last year, against Maksim Vlasov (Maksim Vlasov vs Olanrewaju Durodola) and Krzysztof Wlodarczyk (Krzysztof Wlodarczyk vs Olanrewaju Durodola) but then he has beat Jackson Junior and Maroy Sadiki. Cieslak vs Durodola is valid for the vacant Republic of Poland International cruiserweight title. Watch the video and rate this fight!

we hope to find a better video
https://www.youtube.com/watch?v=CzmwKKzVFJA