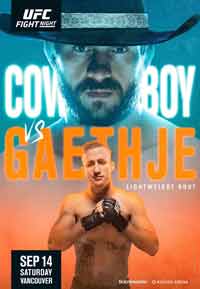 Review by AllTheBestFights.com: 2019-09-14, back and forth bout between Jim Crute and Misha Cirkunov: it is close to get four stars (UFC Performance of the Night).

The undefeated black belt in Brazilian jiu-jitsu Jimmy Crute entered this fight with a perfect mma record of 10-0-0 (70% finishing rate) and he is ranked as the No.19 light heavyweight in the world. In his last three bouts he has won over Chris Birchler, Paul Craig and Sam Alvey (Sam Alvey vs Jim Crute).
His opponent, Misha Cirkunov (black belt in Bjj as well), has an official record of 14-5-0 (86% finishing rate) and he entered as the No.37 in the same weight class but he won just one out of his last four bouts, against Patrick Cummins last year (Misha Cirkunov vs Patrick Cummins); after this fight, in 2019, he has lost to Johnny Walker (Misha Cirkunov vs Johnny Walker). Jimmy Crute vs Cirkunov is on the undercard of Donald Cerrone vs Justin Gaethje – UFC Fight Night 158 (UFC on ESPN+ 16). Watch the video and rate this fight!