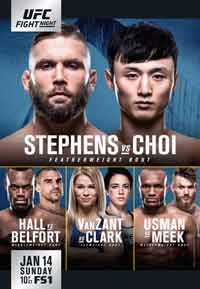 Review by AllTheBestFights.com: 2018-01-14, fight not so exciting between Paige VanZant and Jessica-Rose Clark: it gets two stars.

Paige VanZant entered this fight with a mma record of 7-3-0 (57% finishing rate) and she is ranked as the No.38 women’s strawweight in the world. She fought twice in 2016 beating Bec Rawlings (=VanZant vs Rawlings) and losing to Michelle Waterson (=VanZant vs Waterson).
Her opponent, Jessica-Rose Clark, has an official record of 8-4-0 (50% finishing rate) and she entered as the No.22 flyweight. She lost two consecutive bouts between 2016 and 2017, againt Pam Sorenson and Sarah Kaufman, but then she has won over Carina Damm and Bec Rawlings. VanZant vs Clark is on the undercard of Jeremy Stephens vs Doo Ho Choi – UFC Fight Night 124. Watch the video and rate this fight!

(Free embeddable video hosted on Youtube and not uploaded by AllTheBestFights)
https://www.youtube.com/watch?v=h3U5gEkvadk