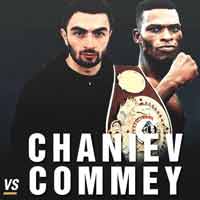 Review by AllTheBestFights.com: 2019-02-02, good exchanges between Richard Commey and Isa Chaniev: it gets three stars.

Richard Commey entered this fight with a pro record of 27-2-0 (24 KOs=89%) and he is ranked as the No.6 lightweight in the world (currently the #1 in this division is Vasyl Lomachenko). He lost two consecutive fights in 2016, both via split decision, against Robert Easter Jr (Robert Easter Jr vs Richard Commey) and Denis Shafikov (Denis Shafikov vs Richard Commey) but then he has won three bouts defeating Alejandro Luna (Richard Commey vs Alejandro Luna) and Yardley Armenta Cruz in 2018.
His opponent, Isa Chaniev, has an official boxing record of 13-1-0 (6 knockouts) and he entered as the No.12 in the same weight class. He was defeated by Fedor Papazov in 2017 but then he has won over Jean Pierre Bauwens, Juan Martin Elorde and Ismael Barroso (Ismael Barroso vs Isa Chaniev). Commey vs Chaniev is valid for the vacant IBF World lightweight title; undercard of Eleider Alvarez vs Sergey Kovalev 2 . Watch the video and rate this fight!