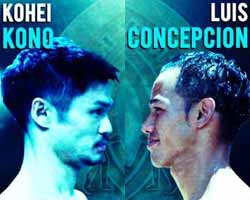 Review by AllTheBestFights.com: 2016-08-31, fight not particularly good between Luis Concepcion and Kohei Kono: it gets two stars.

The world champion in two different weight classes Luis Concepcion entered this fight with a professional boxing record of 34-4-0 (24 knockouts) and he is ranked as the No.4 super flyweight in the world. He fought three times last year losing to #1 Carlos Cuadras (=Cuadras vs Concepcion) and winning over David Sanchez (=Sanchez vs Concepcion) and Hernan Marquez (=Concepcion vs Marquez 3).
His opponent, the Wba super-Flw champion Kohei Kono, has an official record of 32-8-1 (13 knockouts) and he entered as the No.6 iun the same weight class. He suffered his last loss when he faced Liborio Solis in 2013 (4-stars fight, Kono vs Solis), since then he has collected four victories and one draw. ‘El Nica’ Concepcion vs Kono is valid for the WBA World super flyweight title. Watch the video and rate this fight!