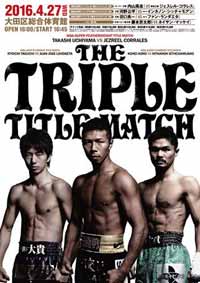 Review by AllTheBestFights.com: 2016-04-27, nice exchanges between Takashi Uchiyama and Jezreel Corrales: it gets three stars.

The undefeated Takashi Uchiyama entered this fight with a pro boxing record of 24-0-1 (20 KOs=83%) and he is ranked as the No.1 super featherweight in the world. His only draw occurred when he faced Michael Farenas in 2012, since then he has won six consecutive fights beating Oliver Flores in his last one (=Uchiyama vs Flores).
His opponent, Jezreel Corrales, has a record of 19-1-0 (7 knockouts) and he entered as the No.22 in the same weight class. He suffered his only defeat when he faced Jhonatan Arenas in 2009, since then he has collected 18 victories and one no-contest winning over Juan Antonio Rodriguez in his last bout (=Corrales vs Rodriguez). Uchiyama vs Corrales is valid for the WBA Super World super featherweight title (held by Uchiyama). Watch the video and rate this fight!

Their next fight: Jezreel Corrales vs Takashi Uchiyama 2